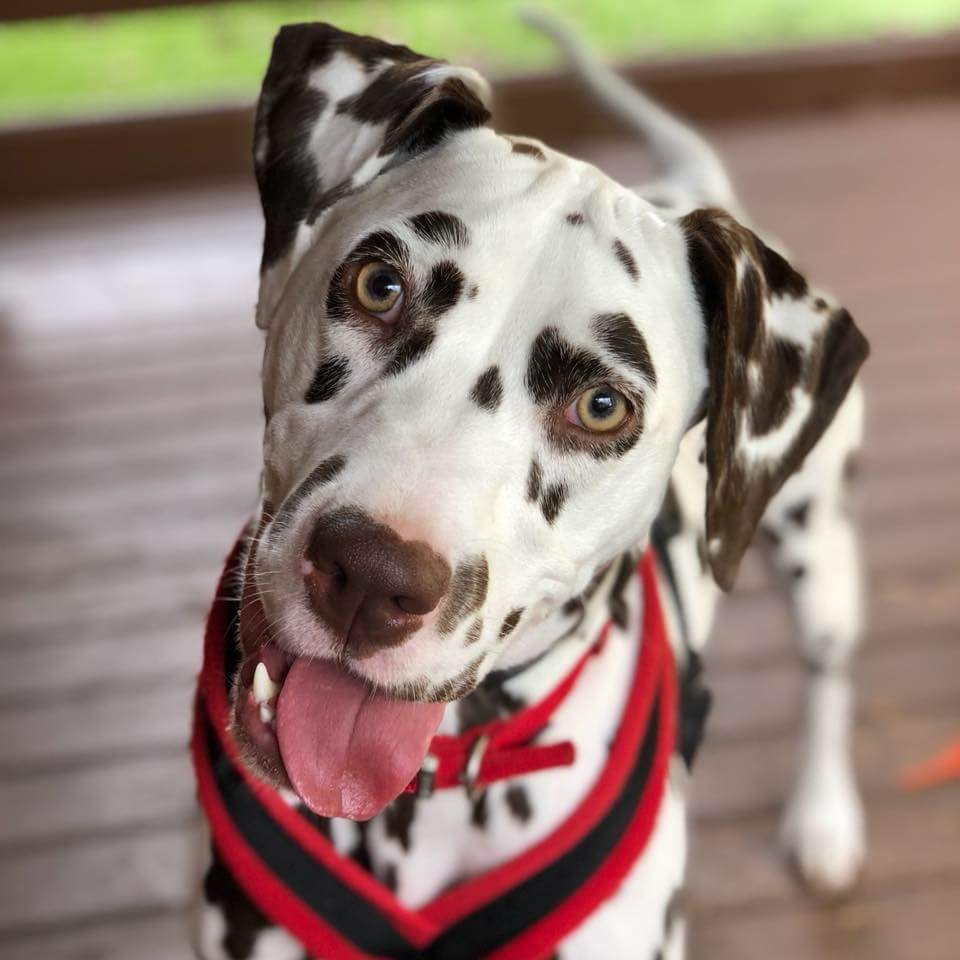 As a puppy she was purchased from an online site but when she became very ill in February this year, her owners could not afford the vet bills and poor Beau was dropped off at an RSPCA centre.

Trudy, a dalmatian-lover for many years, said: “I lost both of my dalmatians two weeks before I rehomed Beau so she came along at just the right time for me. She’s an absolute poppet, I couldn’t have picked a better dog.”

Beau was nine-months-old when her previous owners brought her to RSPCA Millbrook Animal Centre in Chobham after buying her from an online site. She was suffering from parvovirus which can be fatal in puppies and is very contagious to other dogs. She was extremely poorly and bleeding heavily when she arrived on Millbrook’s doorstep and was signed over into RSPCA care. 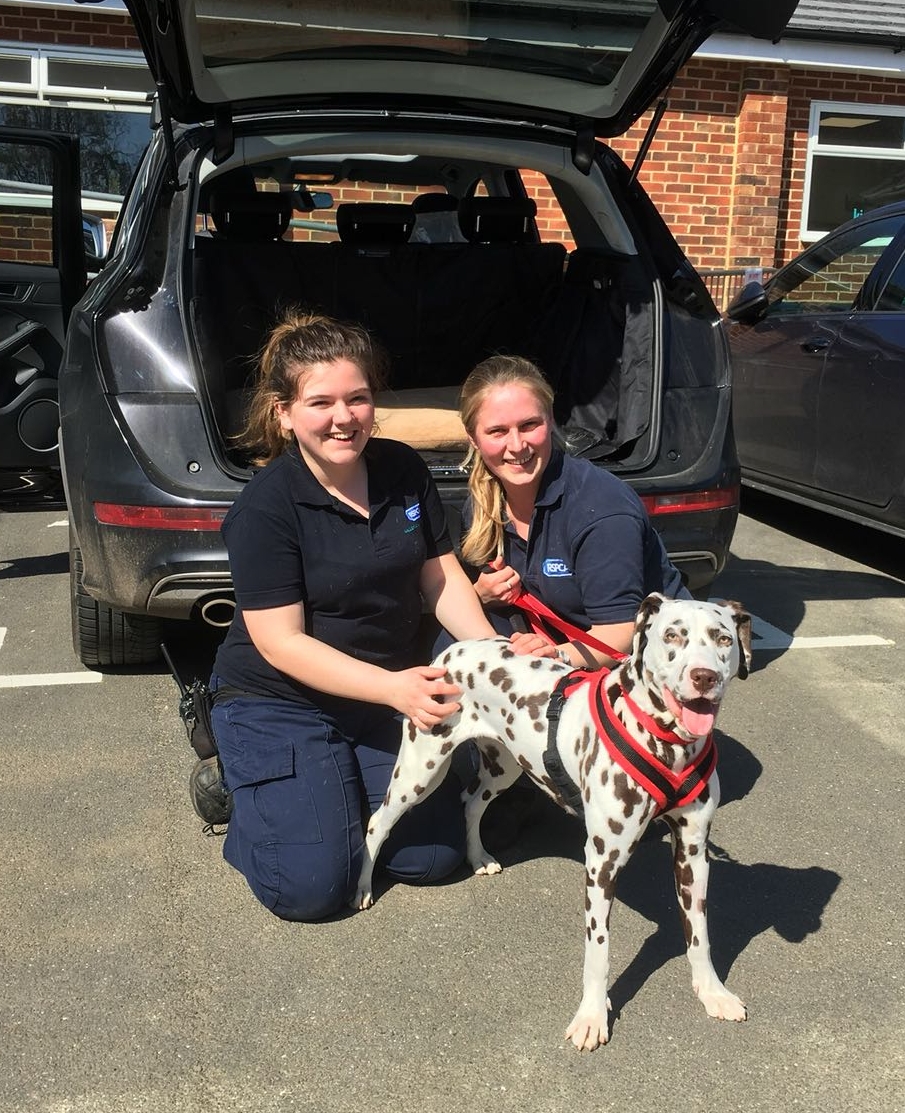 Her previous owners were told she had been vaccinated but they never saw vaccination cards as proof and four months later, the dalmatian pup became very ill.

Staff at Millbrook had to keep Beau isolated so that she did not make the other 46 dogs in their care poorly. Sadly, despite veterinary staff caring for her as quickly as they could this meant she was in isolation for a month and during that time poor Beau missed out on all the everyday things puppies experience whilst growing up.

Once she had recovered, she was rehomed in April this year but sadly she was brought back to the centre because the family found her behavioural problems too overwhelming. Beau was frightened of doorways, she was fearful of entering the house and new noises, sights and smells all seemed to terrify her. She was scared to go out in the garden and had a tendency to play too roughly. 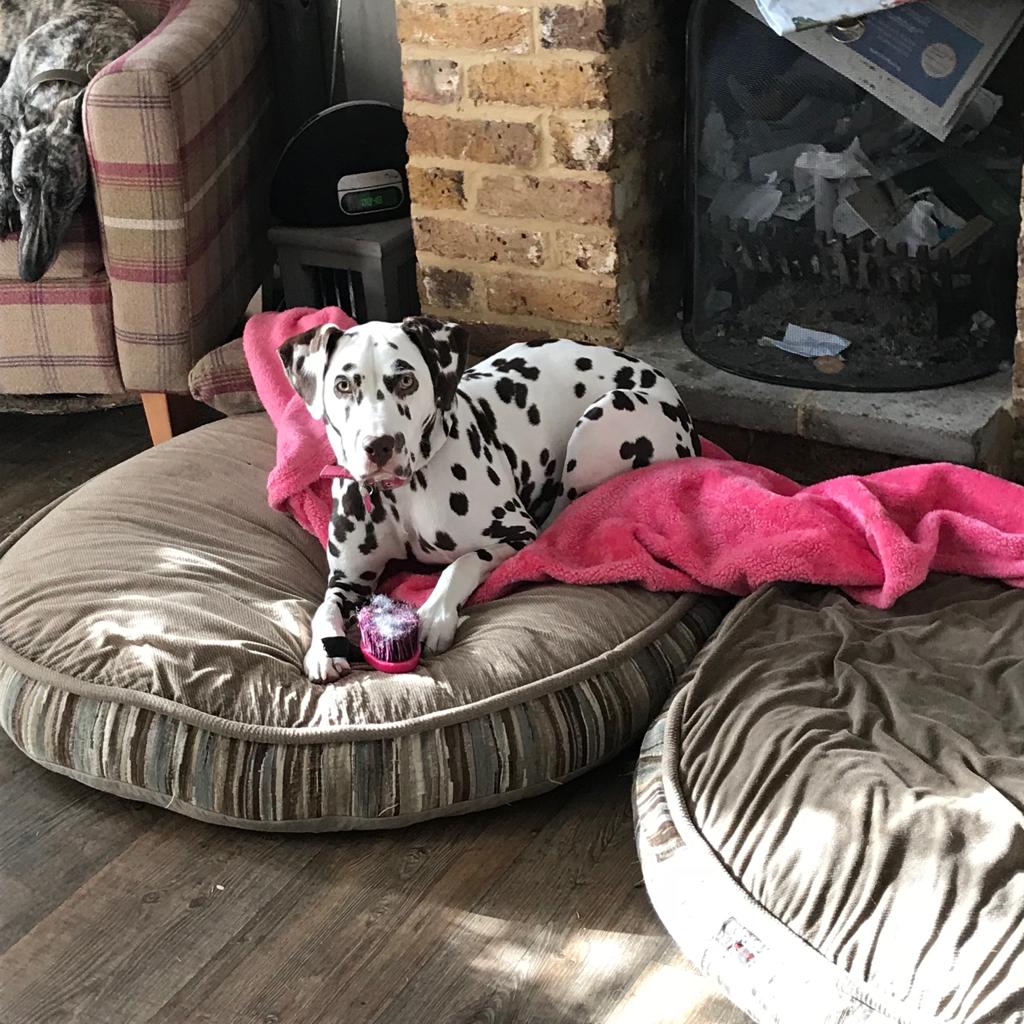 The staff at Millbrook spent the next six months carrying out behaviour training with Beau to build up her confidence. The centre has a mock-up house called Bounces Retreat which is complete with a TV, radio, kettle and hoover to get dogs used to being in a home environment. With plenty of treats and encouragement they gradually increased the noise of household appliances, keeping Beau calm and happy. She also bonded closely with two kennel staff in particular, Lucy Stinson and Hanna Potbury who made her a snowman and brought it into her isolation kennel so she could still play in the snow.

Then finally Trudy, who lives in Ascot in Berkshire, was told about Beau by her vet and rehomed her in September. Trudy worked for British Dalmatian Welfare for 15 years and has owned about 12 dalmatians herself over the years, as well as helping to rehome over 100 dalmatians to loving owners.

She said: “It was Windlesham Vets who told me about Beau so I went to Millbrook and just fell in love with her. I’ve learnt so much from Dalmatian Welfare that I knew I could help. There is so much she hasn’t experienced which is why she gets so nervous. She missed out on her puppyhood so she is still a bit of a puppy at heart. 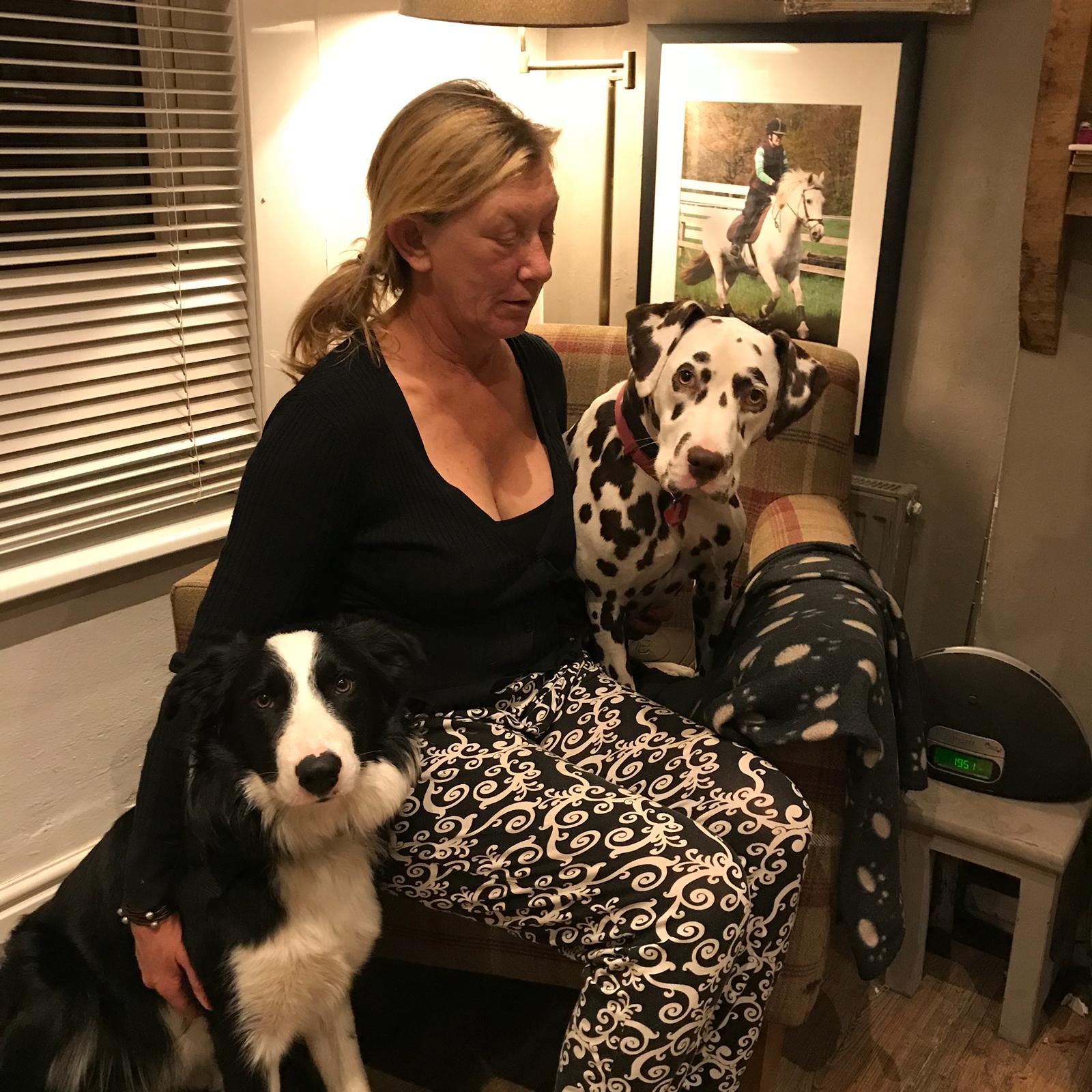 “The day she came back with me, she was so nervous coming through the door. I had to pick her up to get her in the car or through the door and now she jumps in the car on her own. I even slept with the door open when she first came home because she was wary of doors but she’s much more confident now. I don’t even need to have her on a lead all the time now, she’s so well behaved.”

Trudy is a mobile hairdresser and Beau, now named Bonnie, goes to work with her everyday so they spend a lot of time together. Trudy also has a retired racing greyhound called Penny and the pair of them get on very well with Bonnie finding reassurance in having another dog around the house. 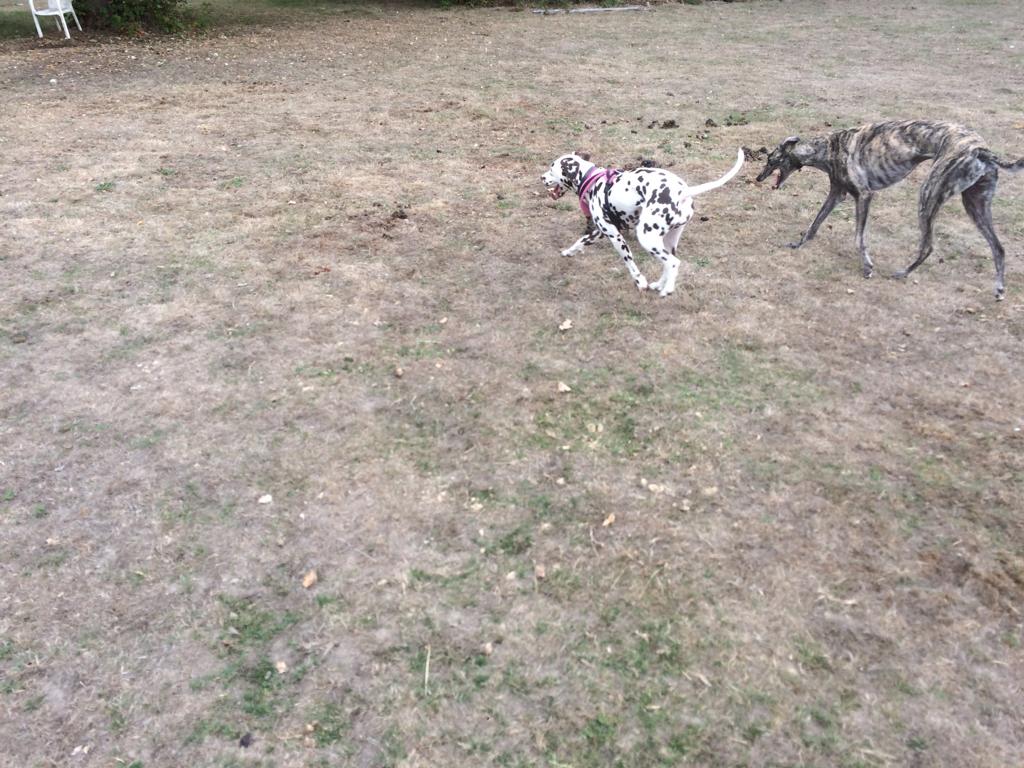 Trudy continued: “She’s getting better all the time and coming on leaps and bounds. The girls at Millbrook did a fantastic job with her and I’ve carried on her training and just getting her used to all the things she never had the chance to experience as a puppy because she was so poorly. She’s a lovely dog and a typical dalmatian so I’m really glad I’ve been able to give her a loving home, a new sister and a second chance at happiness.”

Joss Iveson, from RSPCA Millbrook Animal Centre said: “Poor Beau is a fantastic dog but she had a tough start in life that really had a negative impact on her which meant she had no idea how to be a normal dog. It took a long time and lots of effort to try and build up her confidence and get her used to all the experiences she would encounter in a normal home environment. To Beau, these everyday things were completely alien because she had to be in isolated kennels for an important time in her life when she should have been socialising and being a typical puppy. That is why we are just thrilled that Trudy came along and has helped Beau overcome even more of her fears and given her the loving home she deserves.

“Sadly, we do see people buying puppies online without knowing very much information about them and often this can result in the puppy becoming very ill because they haven’t had the right vaccinations.

“We’d always encourage people to consider a rescue dog but if you are buying a puppy make sure that you see proof of vaccinations, ensure you see the pup with its mum in a home environment and make sure to ask lots of questions to ensure you get a happy and healthy puppy.”

For more information and guidance, use the Puppy Contract on what to look for and how to find a responsible breeder.

Parvovirus can often be a fatal virus for dogs. It mainly affects puppies between six weeks and six months of age – often after they are weaned too early or stressed (e.g by some puppy farming conditions). But it can also affect older dogs which are unvaccinated or have not had regular boosters. 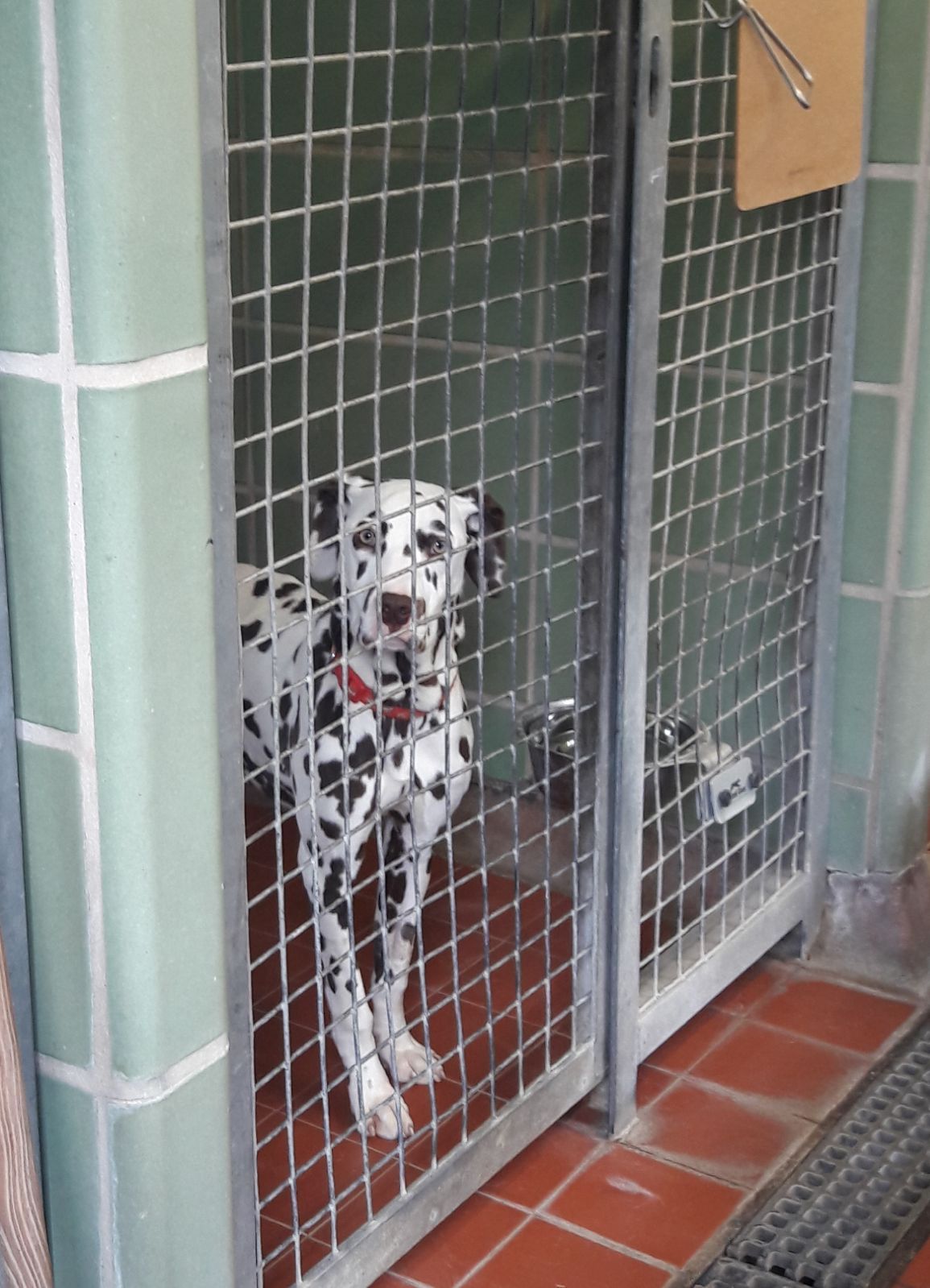 are vomiting and horrid bloody diarrhoea, which can have an awful smell. Dogs become depressed, dehydrated or feverish; they may collapse and it can be painful for them. Puppies who are affected at a very young age can suffer from heart problems and often this can be fatal.

The most important ways to avoid this horrid disease are to make sure you get your dog from a reputable source and make sure they have had their vaccinations – often they need three vaccinations spread a couple of weeks apart. Good breeders and rehoming centres like the RSPCA will do the initial vaccination, and you may need to continue those.