Bear, a 4-year old Irish Greyhound is a typical greyhound – loves the laid back life and was often found, paws-up on his own sofa. He shared his home with owner Ashton and Ashton’s partner and their other dog, who they were fostering until a forever home could be found.

On the 4th February, this year, Bear or Beardy Bear as he was affectionately called, was on his usual sofa watching the NFL in his usual “upside down position”. During the game, both dogs were let out in to the garden (around 1:30am) for the toilet. Bear never ventured down to the bottom of Ashton’s garden, he always stayed as close to the back door as possible.

When it was time to come in, Ashton opened the door and only the foster dog was at the back door, knowing immediately that this was completely out of character, Ashton called for Bear and there was no response and no sign of him anywhere.

As DogLost hear time and time again – our dogs should be safe in our own gardens.

When asked, Ashton says “These last few weeks have been horrendous; it really is soul-destroying when someone steals your dog. Dogs can’t be “replaced”. Bear is part of my family and I can’t seem to rest while I don’t know where he is”

“Is he being looked after? Is he being hurt? Does he think I’ve just abandoned him?”

Ashton has had the help of the Greyhound Trust from across the West Midlands and they, with the help with their volunteers have conducted regular searches.

“A dog the size of Bear doesn’t just disappear. If he managed to get out of the garden, which given his anxiousness is highly unlikely, and then was sadly involved in a road traffic accident, someone would have found him but no accidents have been reported.”

Bear is very easy to identify. He is microchipped and also tattooed. He has been neutered so he can’t be bred from. When he went missing he was wearing a blue collar with a red light on it.

“Someone needs to bring my boy back, he isn’t part of anyone’s family other than mine” Ashton says.

“If you found him, took him in thinking he’s a stray then thank you for looking after him but he isn’t a stray – he is loved and missed every day and if you took him from my garden then please try to find it in your heart to return him to me. He’s not going to make you a lot of money if you are planning to sell him on, but to me he is priceless”

If you have any information relating to Bear’s theft or you know where he is, please contact DogLost directly on 0844 800 3220.

Running With Dogs Can Beat The Blues!
Editor 10th September 2019 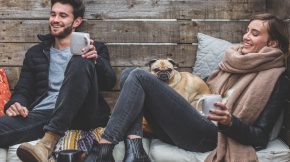