The film is being released following research revealing that dog owners are on average eight per cent happier than non-dog owners.

‘FEED DIFFERENT’ is an affectionate pastiche of the iconic 1997 ‘Think Different’ advert by Apple, but with human thinkers including John Lennon, Albert Einstein and Pablo Picasso being replaced by canine characters. BAFTA-nominated Gary Tarn made the film for tails.com, a new company that tailor-makes food for a dog’s unique nutritional and dietary needs.

The research also conclusively revealed that dogs are the nation’s favourite pets with 61 per cent of adults saying a dog would be their number one pet choice ahead of cats (23 per cent), fish (4 per cent), horses (3 per cent) and birds (2 per cent).

James Davidson, co-founder and CEO of tails.com, said: “Dogs are one of the most diverse species on the planet, but they all have one thing in common in that they make the lives of their owners happier. Our film captures some of the unique personalities of dogs and recognises how much they can change our individual worlds for the better.

“Because every dog is different we believe its food should be too, which is why we deliver tailor-made food blended to each individual dog’s nutritional and dietary needs – helping owners enjoy a happier dog for longer.”

Here’s to the crazy ones.
The misfits.
The rebels.
The troublemakers.
The round pegs in the square holes.
The ones who see things differently.
They’re not fond of one size fits all.
And they have no respect for the status quo.
You can walk them, try and train them, glorify or vilify them.
About the only thing you can’t do is ignore them.
Because they change things.
They push dog-kind forward.
And while some may see them as the crazy ones, we see happy ones.
Because the dogs who are crazy enough to think they can change our world, are the ones who do.

And finally, here’s the film itself!

Tags:
Previous Article
PG Tips Chimp Star Sadly Passes Away At Age 48
Next Article
Pete the Vet: Why Pets Are Good For YOU!

Pete the Vet: Why Pets Are Good For YOU!
Marie Carter-Robb 25th April 2016 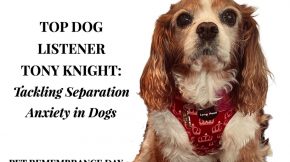